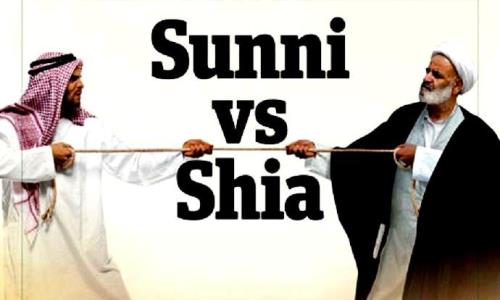 This Iron-Clay Feet Of Daniel 2 study discusses the different people groups involved in the narrative of ‘Christianity’ and ‘Muslims.’

It’s important to know the beliefs of the different people groups, to understand why certain factions are persecuted.

People refer to ‘Muslims’ in the generic sense, but there are different factions, which is important to know to understand the narrative.

The schism between Sunni and Shia Muslims lies in disputes over who would succeed Muhammad as leader of the faithful after his death in 632 A.D.

The Shiites thought the prophet’s son-in-law and cousin should lead as caliph, particularly given his blood relationship to Muhammad.

Their opponents, the Sunnis, thought Abu Bakr, one of Mohammad’s first converts, should be their leader.

An assembly of Moslems in Mecca elected Abu Bakr as the first ‘khalifat rasul Allah’ (successor of the Prophet of God), or caliph.

Under him the collection of Mohammed’s revelations was recorded in the Qur’an.

The Shiites and Sunni have battled against each other ever since, and the Shiites lost a series of wars for power in the early years of Islam and today are the clear minority in global Islam, making up about 15 percent of adherents.

Sunni Muslims support the Vatican, but Shiite Muslims do not.  Sunni’s believe that Jesus was a great prophet and they believe that the Pope is his representative on earth, so they revere the Pope.

For this reason the Shiite are enemies of the Papacy, so they are targeted by Sunnis to be killed.

The Jesuits control the U.S. intelligence agencies, military and President, and they used them to kill hundreds of thousands of Shiite Muslims, during the wars in Iraq.

When you see in the news that Muslims are killing other Muslims, many times it because Sunni are killing Shiite Muslims.

The Roman Catholic Church Jesuits cause the Sunni Muslims to kill Christians, Jews and Shiite Muslims.

People refer to ‘Christians’ in the generic sense too, but that is not accurate.

We seeing a lot of persecution of people called Christians, especially in the Middle East, so let’s be clear about what their beliefs are, to discern whether they are true followers of Christ.

This is not a proclamation of judgment on anyone, as God knows who are His true followers. But it’s necessary to understand what different people who call themselves ‘Christians’ really believe in.

There are 1.2 Billion Catholics, who call themselves Christians.

The majority of Catholics believe that they must follow seven sacraments to be “saved” through the Catholic Church.  They confess their sins to a priest, not Jesus. They pray to Mary as their intercessor and redeemer. That is not true salvation.

Catholics make up the majority of people called ‘Christian,’ as the enemy has deceived them in the name of Christ.

The Orthodox Church broke away from the Catholic Church in 1054 A.D.

They too believe that they must follow the sacraments to be saved, and they too revere Mary as their intercessor and redeemer. That is not true salvation.

Most people called Christians in Europe, Russia and Muslims countries, are either part of the Catholic Church or the Orthodox Church.

Since the split, the Roman Catholic Church has consistently persecuted Orthodox Christians, many times using Muslims and other people groups to attack them.

66 Million Russian Orthodox Christians were murdered by Bolsheviks in the early 20th century, and you can be sure the Catholic Church was behind it.

In many cases the people that Muslims kill are not true followers of Christ.

Muslims get blamed for killing Christians during the Crusades, during the attacks on Constantinople, etc., but most of those people were Catholics or Orthodox.

Any persecution of them is horrible, but we need to discern who are the true followers of Christ.

A recent example is that of Meriam Ibrahim, who was condemned to death for marrying a Christian.  She was released and then promptly met with Pope Francis, who blessed her, as she is Catholic.

Muslims are converting to Christianity, but the question is, what version?

Dating back to Augustine, the Roman Catholic Church has tried to convert Muslims into Catholicism.

We’ve seen that the Jesuits of the Roman Catholic Church are using apparitions of the Virgin Mary to be known as Our Lady of Fatima, to draw Muslims to the Papal Church.

We know that Bishop Sheen has said that the way to bring Muslims into Catholicism, is through Mary.

So we have to be aware that some of the Muslims who are converting, are really becoming Catholics.

Again, this study is not about judgment, for only the Father knows the hearts of each person.

But it helps give perspective about who is being killed and why.

Next Islam In Bible Prophecy study: The Faked War On Terror