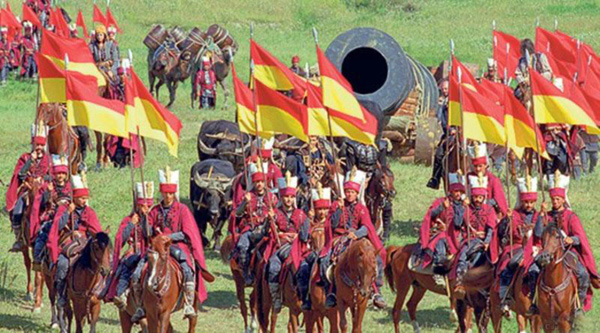 This Iron-Clay Feet Of Daniel 2 study shows you the true historical fulfillment of the 6th Trumpet of Revelation, which caused the Turks of the Euphrates River, to attack the Roman Empire

In a previous study, you learned that the 5th Trumpet of Revelation 9 represented our Lord raising up the Saracen (Muslim) army to attack the Roman Empire for 150 years from 612 – 672 A.D.

In this study you will learn that the true historical fulfillment of the 6th trumpet is our Lord allowing the Turks to cross the Euphrates River, to attack the Eastern Roman Empire for 391 years, which ended in them knocking down the thick protective walls of Constantinople with large cannons.

Once again, when you see that it was the Lord who sent the Turks against the Roman Empire, you will gain a new perspective about the Muslims, that instead of just being a blood-thirsty people who killed others, they were in fact sent by God to execute vengeance against the pagan Roman Empire, which had killed 10 million Christians.

Video 2 of the historical fulfillment of the 6th Revelation trumpet.

Video 3 of the historical fulfillment of the 6th Revelation trumpet.

Revelation 9:13-14, “And the sixth angel sounded, and I heard a voice from the four horns of the golden altar which is before God, Saying to the sixth angel which had the trumpet, Loose the four angels which are bound in the great river Euphrates.”

The 6th Trumpet represents the rise of the Turkish Empire, which God used to subjugate the remaining “third part” of the area of Pagan Roman Empire.

The Turks (also known as the Tartars and Turkomans) had moved into the area East of the Euphrates, but for two generations the river prevented (bound them) them from moving towards the West.

Revelation 9:15 “So the four angels, who had been prepared for the hour and day and month and year, were released to kill a third of mankind.”

Finally in 1062 A.D., they were able to cross the Euphrates and surge against the eastern Roman Empire.

Alp Arslan was the leader who led the Turks across the river, but he died in battle, and was succeeded by Malek Shah, whose divided the kingdom under his four sons.

These four sons would seem to represent the four angels, as they were the leaders who were released from the Euphrates to execute God’s will.

An angel (Strong’s 32 aggelo) may be a human messenger or a messenger of God. In this context, they are the four Turkish sultans who were released to attack the Eastern Roman Empire

In 1062 A.D., the Turks, also known as the Ottoman Empire, moved out of the Euphrates Valley to conquer.

For 391 years they conquered the remaining third part of the territory which belonged to Pagan Rome.

In 1453 A.D. they captured the prized capital city of Constantinople, the headquarters of the Eastern Roman Empire.

That’s a perfect fulfillment of the time period that John gave us.

The third part of men, or the Roman empire then represented by the Constantinople monarchy, is to be slain, and not merely tormented.

Recall that during the 5th Trumpet of Revelation 9 the Muslims attacked Constantinople, but their attempts to overtake it failed, as the wall was impregnable, so they merely tormented the people.

Instead of being translated as “two hundred million“, the language should read “two myriads of myriads.”

The Turks fulfilled this, as they organized their armies in units of ten thousand.

Revelation 9:17, “And thus I saw the horses in the vision: those who sat on them had breastplates of fiery red, hyacinth blue, and sulfur yellow; and the heads of the horses were like the heads of lions; and out of their mouths came fire, smoke, and brimstone.”

“They had breastplates of fiery red, hyacinth blue, and sulfur yellow“ – The Turks uniforms were red, blue and yellow.

“The heads of horses were like the heads like lions”
Alp Arsion, their leader, was known as the “Valiant Lion“, and many others had names like the brace lion, the heroic lion, etc.

They were known for their ferocity, even more than the Arabs.

The Turkish tribes carried a horse-like tail, instead of banners, as they rode into battle.

They wore them on their Fez’s (hats), as seen above. The more horse tails, the more important you were.

Revelation 9:18-19, “By these three plagues a third of mankind was killed–by the fire and the smoke and the brimstone which came out of their mouths. For their power is in their mouth and in their tails; for their tails are like serpents, having heads; and with them they do harm.”

Constantinople was almost an impregnable fortress because of her strong walls.

The Turks used gunpowder and cannons in warfare, to knock down troops and city walls.

Here’s a picture of the Dardanelles Gun, which was cast in 1464 A.D. and based on the Orban bombard that was used for the Ottoman besiegers of Constantinople in 1453.

So the “fire, smoke, brimstone” is a manifest allusion to artillery and gunpowder; which were the main engines used by the Turks.

“For their power is in their mouth and in their tails” – The cannons shot forth with fire and smoke, to take down cavalry, and battle the walls of fortified cities.

They lit the fuse at the tail of the cannon, to ignite the gunpowder, which is the power which propelled the huge balls from the mouth of the cannon.

They surrounded Constantinople and by cannon fire the city fell. This was the first recorded time that a city fell because of superior artillery.

Do you now see how the sixth trumpet of Revelation has been fulfilled already, and it does not apply to the end-times when four angels who have been bound near the Euphrates River until the Day of Wrath, lead an army of 200 million to kill a third of the world?

To see how the Revelation seal, trumpet and bowl judgments all fit together, and to see where we’re at on the timeline today, click on Revelation Fulfillment Timeline.

Next Islam In Bible Prophecy study: The drying up of the Ottoman Empire during the 6th bowl of Revelation 16.

2 thoughts on “The Sixth Trumpet Of Revelation 9”