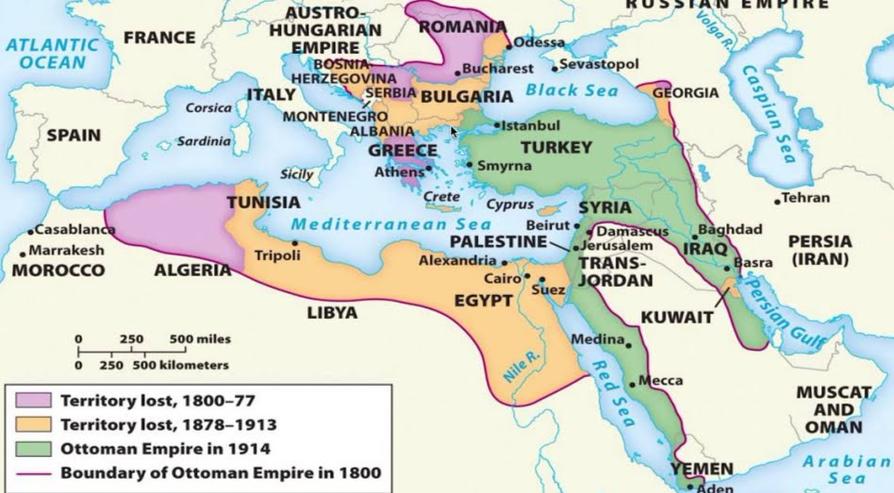 This Iron-Clay Feet Of Daniel 2 study shows you the true historical fulfillment of the 6th bowl of Revelation, which caused the vast Muslim Ottoman Empire to dry up.

In the previous study you saw that the Turks, who became the great Ottoman Empire, were released during the 6th Trumpet of Revelation 9, as part of God’s vengeance in having them attack the Eastern Roman Empire in Constantinople.

In order for the Roman Catholic Church to keep them in check, they caused them to lose control of their vast territories, which fulfills God’s plans.

Revelation 16:12-16, Then the sixth angel poured out his bowl on the great river Euphrates, and its water was dried up, so that the way of the kings from the east might be prepared.

The 6th Bowl was poured out to dry up the Ottoman Empire, the people (river) of the Euphrates who had been released during the 6th Trumpet of Revelation 9. During the 18th and 19th centuries, they lost control of the territories that they had occupied. They lost control of Palestine to General Allenby of Great Britain in 1917 A.D.

The Ottoman Empire was dried up “so that the way of the kings from the east might be prepared.”

They lost control of the territories that they had occupied, such as Syria, Jordan, Iraq, Saudi Arabia and Kuwait, who may be called the Kings of the East.

Since then the Jesuits have created events that pushed Ashkenazi Jews into the Palestine area, to justify the creation of the state of Israel.

The Roman Catholic Church Jesuits are gathering the major religions against each other by pitting the Muslim Kings of the East (Syria, Jordan, Iraq, Saudi Arabia, Kuwait, Iran, etc.), against Israel. This will lead to World War III, where Muslim countries and Israel will war against each other.

Next Islam In Bible Prophecy study: The Our Lady Of Fatima And The Virgin Mary Connection