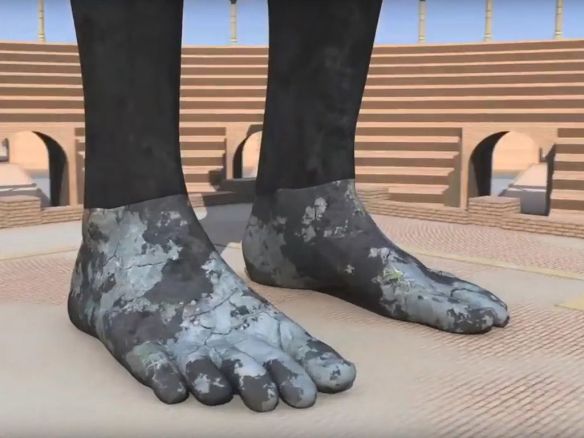 This Iron-Clay Feet Of Daniel 2 study shows how Muslims fulfill prophecy in Daniel 2.

Daniel 2 describes a statue with iron legs, which represents the Roman Empire. Satan used the Roman Empire to try to wipe out the Early Church, killing millions of saints.

Judgement came against it, causing the Roman Empire to collapse from within, from civil wars and excessive taxation; and from without, when the Lord sent army after army against it.

The last Roman Emperor was removed in 476 A.D., and Satan responded by empowering the Roman Catholic Church to rise to power in their place. The Popes took the title of the Roman Emperors, Pontifex Maximus, as the head of the church and state, healing the deadly head wound.

The Roman Catholic Church didn’t have an army, so they used other people groups, the clay of Daniel 2, to wage war for them.

The statue has feet made of iron/clay, which tells us that the Roman beast would mingle with other people groups, to battle against the kingdom of Christ.

Daniel 2:41-43 “the feet and toes, partly of potter’s clay and partly of iron, the kingdom shall be divided; yet the strength of the iron shall be in it. And as the toes of the feet were part of iron, and part of clay, so the kingdom shall be partly strong, and partly broken. And whereas thou sawest iron mixed with miry clay, they shall mingle themselves with the seed of men: but they shall not cleave one to another, even as iron is not mixed with clay“

The Bible is its own dictionary, so we need not speculate about the meanings.

The word ‘arab’ in Daniel 41, 43 is not found anywhere else; because the passage in Daniel was originally written in Aramaic, which is very closely related to Hebrew.

But when we do a word study, we can see that the Aramaic 6151 ‘arab’ corresponds to Hebrew words that describe the mixing of the Arab race.

Aramaic 6151 arab corresponds to Hebrew 6148 arab – is a primative root, meaning ‘to braid, to intermix’

Hebrew 6154 ereb is derived from 6148, and signifies a ‘web of cloth’, also a mixture (or mongrel race), and especially the people of Arabia, a ‘mingled people’ or ‘mixed multitude’.

Hebrew 6163 arabee is derived from 6152, and signifies ‘an Arab or inhabitant of Arabia’.

Let’s take the narrative of the ‘miry clay’ back further, to Abraham. The Israelites were called ‘clay’ in the Father’s hand.

But now, O LORD, thou art our father; we are the clay, and thou our potter; and we all are the work of thy hand. Isaiah 64:8

But Abraham’s first son was born out of him ‘mingling/mixing’ with the Egyptian handmaiden Hagar.

Now Sarai Abram’s wife bare him no children: and she had an handmaid, an Egyptian, whose name was Hagar. And Sarai said unto Abram, Behold now, the LORD hath restrained me from bearing: I pray thee, go in unto my maid; it may be that I may obtain children by her. And Abram hearkened to the voice of Sarai. Genesis 16:1

Out of this the Father made a great nation, the miry clay of the mixture of Abraham and an Egyptian.

And as for Ishmael, I have heard thee: Behold, I have blessed him, and will make him fruitful, and will multiply him exceedingly; twelve princes shall he beget, and I will make him a great nation. Genesis 17:20

Out of Ishmael came twelve sons, just like Isaac.

These are the sons of Ishmael, and these are their names, by their towns, and by their castles; twelve princes according to their nations. Genesis 25:16

We can clearly see the relationship of these words, which are pointing to the mixed race of the Arabs. And we see how Abraham mixed with an Egyptian to produce the Arab race.

The clay represents the Arabs, who became the great Ottoman Empire, who worked with the Roman Catholic Church, to control the lands previously held by the Roman Empire.

They both killed Christians and Jews, but they have also warred with each over possession of Jerusalem and other territories, which led to the Crusades where they fought against each other, as they don’t mix well.

Jerome said “In our time, the clay has become mixed with iron. Once nothing was stronger than the Roman Empire, now nothing weaker, mixed up as it is with, and needing the help of barbarous nations.”

Next Islam In Bible Prophecy study: Why Islam Was Created