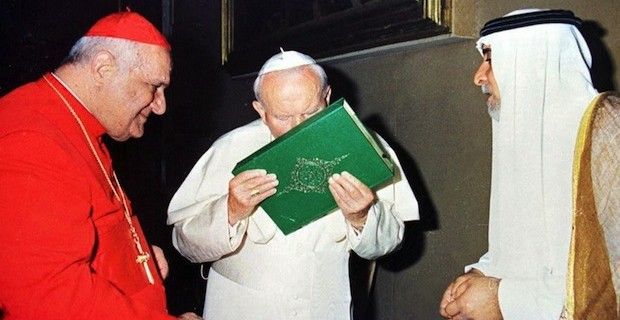 This Iron-Clay Feet Of Daniel 2 study series focuses on how the Muslims have been connected to the Roman Catholic Church since the 7th century. In this prophecy fulfillment study you will learn that in the 7th century.

The Roman Bishops propped up Mohammed as the prophet of Islam, with the help of his wife, who was a Catholic, and her cousin who was also a Catholic. They caused him to have visions in a cave, and perhaps be demonically possessed.

They used the Muslims to kill Jews and believers, to conquer territories and to capture Jerusalem.

Daniel 2 speaks of the iron-clay feet, which represents the iron of Rome mingling and mixing with another people group, the Arabs. The antichrist beast Popes had recently rose to power out of the fallen Roman Empire, and they didn’t have an army, so they used the Muslims to wage war against their enemies.

Abraham mingled with the Egyptian handmaiden Hagar to produce the Arab race through the twelve tribes of Ishmael. This fulfilled the Father’s promise to Hagar that they would become a great nation.  The Israelites were the clay in the Father’s hands, the Ishmaelites were the miry clay that came from Abraham’s seed.

The clay represents the Arabs, who became the great Ottoman Empire, who worked with the Roman Catholic Church, to control the lands previously occupied by the Roman Empire. They both killed Messiah’s saints and Jews, but they have also warred with each other during the Crusades, as they don’t mix well.

Satan has empowered the Roman beast to try to eliminate the Scriptures and the Saints, the two witnesses against him and his Roman Catholic Church.

The Satan-empowered Roman beast has changed forms over the years from the Roman Emperors, which killed million of saints; to the sea beast of Revelation 13, the antichrist Popes of Rome, who killed over 50 million saints; to the Superior General (the Black Pope) led earth beast of Revelation 13, who will seek to eliminate all followers of Messiah in their New World Order.

In order for the Jesuits to create their New World Order, they must control the money supply of every country.

In recent years, they use 9/11 to create the supposed War On Terror against Muslims, to justify the American military invasions of Afghanistan and Iraq, both of which now have a Jesuit Rothchild Central Bank, like the U.S. Federal Reserve Bank.

They used Al Qaeda to help overthrow Muammar Gaddafi in Libya, and now Libya has a Jesuit Rothchild Central Bank. This is why Syria and Iran are in the cross-hairs, because they have not bowed down to the authority of the Jesuits.

The Jesuits covertly train, arm and fund, Al Qaeda and ISIS rebels, through the CIA, Mossad and Saudi Arabia.

These radical Muslims are being used to kill believers as part of the Jesuits continued Holy Inquisition; to incite WW III between Muslim countries and Israel; and to push the world into their New World Order.

Then the world will cry out for “peace and safety” and the Jesuits will gladly offer their New World Order as the solution.  They will offer to end wars between religious groups, with their One World religion. And the true followers of Messiah, who won’t bow down to their authority, will become the enemy of the world.

I pray that you will seek the Holy Spirit for guidance, as these teachings are in contrast to what most prophecy teachers are saying. The enemy has created many false explanations of Bible prophecy fulfillment, to confuse the saints, and to deflect blame away from the antichrist beast Popes.

11 thoughts on “The Roman Catholic Church And Islam Connection Studies”